Today marks the one-year anniversary of the Elizabeth Park Rose Blog. What better way to celebrate than to revisit the first post, about the first rose that blooms at the nation’s first public rose garden? Rosa Hugonis–known colloquially as Father Hugo’s Rose–heralds the unofficial start of rose season here at Elizabeth Park when it opens its delicate yellow blooms in early- to mid-May. Last year the first blossoms opened on May 8th; this year–perhaps due to a cool, cloudy late April and early May–Father Hugo waited until May 12th. Located on the north fence of the Heritage Rose Garden, Father Hugo is surrounded by fragrant lilac blooms, lingering daffodils, and a host of heritage rose varieties. In May, Hugo’s large, bushy frame bursts in a flush of mild honey-scented blooms about 2 inches in diameter, each bearing 4-8 pale yellow petals.

Father Hugo,  of the Pimpinellifoliae class, is a species rose, meaning the specimen in our garden is unchanged from its original form in the wild (as opposed to most garden rose cultivars, which are the result of hybridizing and generations of breeding). The rose gets its name from Father Hugh Scallan, a Catholic missionary from Wales. During the 19th century, as the Qing Dynasty waned and the British East India Company came to dominate China’s ports, Christian missionaries were among the first westerners to penetrate inland China. Many of them, including Father Scallan, were also amateur botanists who collected local flora in their travels. Scallan first observed R. Hugonis in north-central China and sent seeds back to London’s Kew Gardens in 1899. The Conard-Pyle company introduced Father Hugo to the U.S. in 1917 as the “Golden Rose of China.” 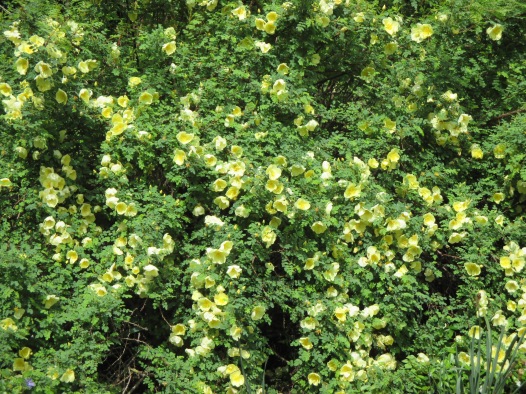 Perhaps due to the same gloomy weather that postponed this year’s debut, Father Hugo presently blooms a bit less abundantly than it did last year. But our Heritage Rose Garden is still well worth a visit this week: Lilacs linger, violet vinca blossoms scatter the rose beds, and another early bloomer–an unidentified crimson rose adjacent to Father Hugo–is in peak form.

Outside our cultivated areas, about 100 yards north of the main rose garden behind the bandstand a close relative of Father Hugo–certainly within the same Pimpinellifoliae class–has established itself among a thicket, draping the undergrowth in plentiful pale blossoms. 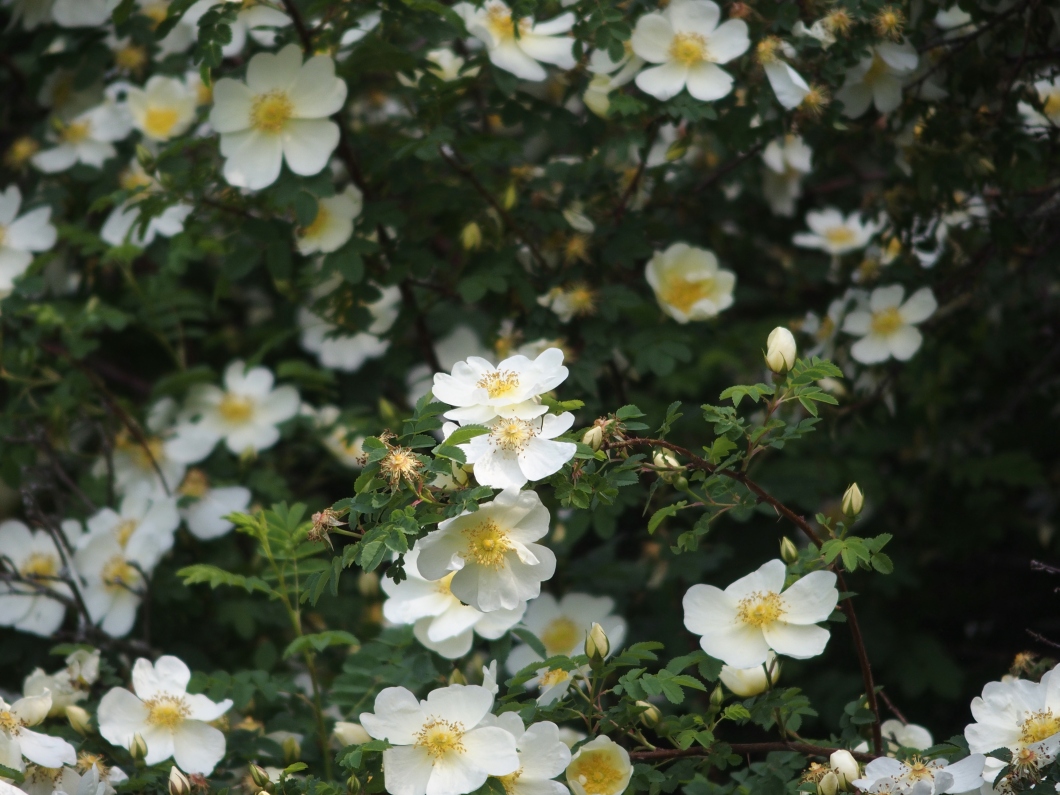 Missionaries in China. Retrieved from http://www.bris.ac.uk/Depts/History/Projects/Missions/Intro.htm