Design a site like this with WordPress.com
Get started
June 19, 2018December 4, 2020 elizabethparkroseblog

Me: “You want the long answer or the short answer?”

Park Visitor: “I have time. Give me the long one.”

Me: “Well, there are over 15,000 rose plants at Elizabeth Park and about 750 varieties of roses. And each one varies by the minute depending on light, time of day, weather, and season. So ask me a hundred times and I’ll give you a hundred different answers.

Park Visitor. “Huh. Ok, give me the short answer.”

Yes, today’s installment of A Rose a Week is dedicated to this gardener’s favorite rose at Elizabeth Park (at least when pressed for an answer). ‘Amadis’ is practically the perfect climber. After the 2017-18 winter, when even many of our hardier plants suffered significant die-back, Amadis emerged largely unscathed. In late May/early June Amadis’s thornless canes erupt in abundant semi-double crimson blossoms that linger for weeks. When frost hits in fall, its thornless canes turn plum. Did I mention it’s thornless? If Amadis has any flaw it’s that its blossoms produce little fragrance. 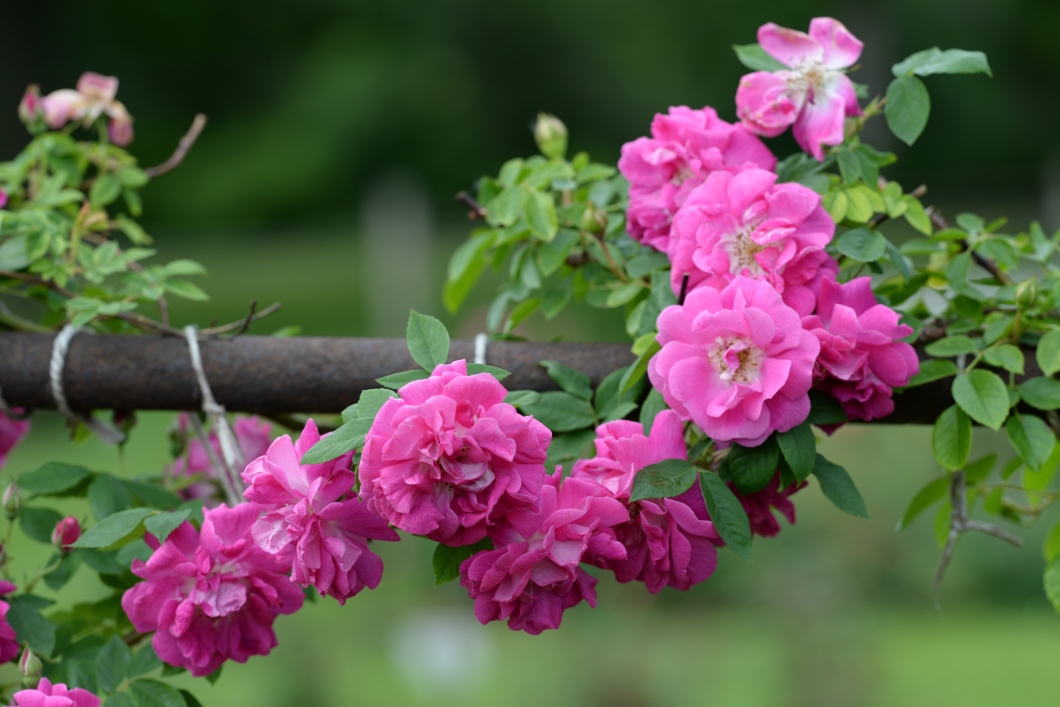 Like many of the climbers and ramblers at Elizabeth Park, Amadis boasts an esteemed provenance. The preeminent 19th-century rosarian Jean Laffay hybridized Amadis in France in 1829 (Dobson & Schneider, 2018, p. 29). Over a career that spanned seven decades Laffay produced countless rose varieties, most notably the “hybrid perpetual,” a class of rose that combines the fragrance of Gallica roses with the repeat flowering of Chinas (Phillips and Rix, 1993, p. 90). Amadis would have arrived early in Laffay’s career, two decades before his hybrid-perpetual triumph.

Despite its usefulness as a climbing rose—at Elizabeth Park we train it to a fenceline in the southeast part of the main rose garden—Amadis is classified as a “Boursault” (Dobson & Schneider, 2018). Boursaults are a small group of mostly thornless roses named for the amateur early-19th-century French rosarian, M. Boursault (Macaboy, 1993, p. 86).

And who/what was Amadis? Presumably Laffay named the rose for a character by that name in a number of French operas, which based their librettos on the medieval Spanish romance Amadis de Gaula. 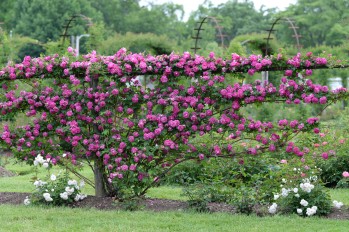 All photos by Mike George